Just being a copycat...

Right now I am: At my mother-in-law's house ... had Christmas dinner with Dan's brother and his family.

Watching: The Sound of Music

Drinking: Egg nog. One of my favorite holiday drinks.

Avoiding: Nothing at the moment.

Feeling: Relaxed. So nice to be somewhere just hanging out and having nothing to do or get ready for.

Missing: My friend, Noonie. When we come to SLO, she and I would get together at some point and we'd also go out for breakfast at Margie's before I left. :(

Thankful: For family and friends...to be able to get together with them as much as possible.

Weather: Chilly outside. It's been a nice, warmish day. Haven't had to wear any sweater or jacket. California Christmas weather.

Praying: For sick relatives and friends - for healing. For family far away. For those who are spending Christmas alone.

Needing: A plan for next year regarding blogging, FBing and internet activity, in general...organization.

Thinking: About how much I miss living in San Luis Obispo. Everytime we visit, it's hard to go back to LA.

Loving: How much God loves us. How He knows all and sees all and cares about everything and everyone in our lives.

Linking with Jeannett and InstaFriday. I don't have an iPhone, but that's okay. You are welcome to join with any cellphone pics. I missed last week, so here are just a few from the past two weeks.
Well, it's kind of hard to see, but a neighbor or two really did it up for Halloween. Kind of reminds me of friends in SLO.

Just some pretty blossoms on one of our walks. Can you believe I can't remember where. I think Santa Cruz on our way to the Partners International conference. 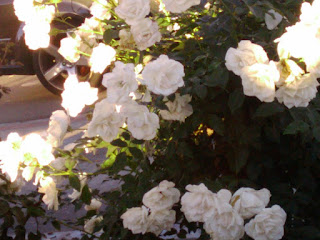 Just looking out to the ocean in Capitola on way to Mt. Hermon camp just up the road. 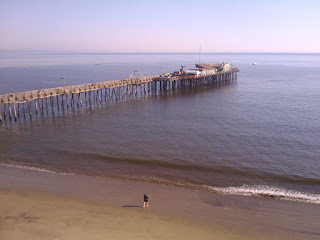 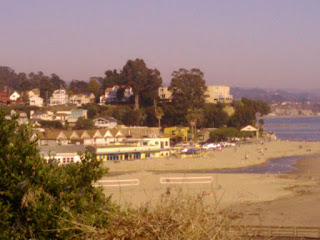 And we made it. Edna didn't want to drive by herself, so she asked Dan if we wanted to go up with her. We didn't even hesitate. One...we were going to Mt. Hermon and Two...we were going to see my sister-in-law, Marilyn, who has worked with PI since 1979...as long as we've been married. Wow! 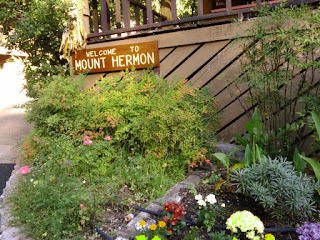 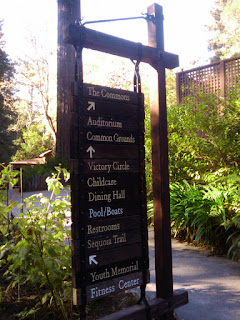 These were on a tree in the Mt. Hermon Conf. office...made of wood. So cute. 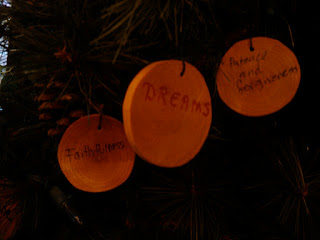 Our nametags. They had ribbons you could stick on your tags...something that maybe expressed who you are or what you believed...just some fun stuff. Dan's originally said "Golf Coordinator". He didn't like the Coordinator part because he didn't want people to think he was actually going to coordinate a golf match of some sort. So, we cut that part off and added the "Go Green." I think that worked pretty well. :) 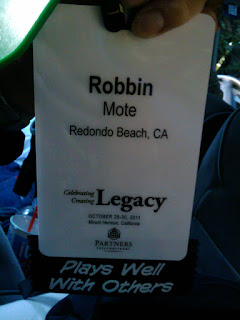 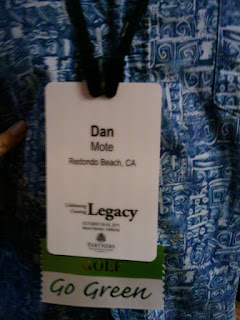 Our tub has feet! Our cabin was fun, except for the HUGE spider. Sorry, couldn't stand looking at him, much less take a picture. :) 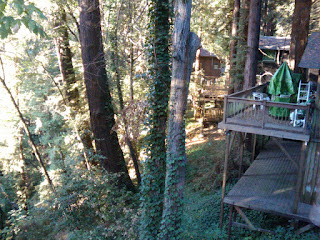 They had a parade of countries (can't remember actual name) where staff/volunteers wore costumes from each of the countries represented by the missionaries from Partners. SO beautiful. You can't see very well, but that's Marilyn and I can't remember her country. So bad of me. 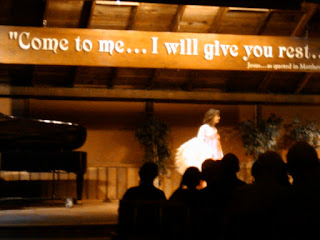 They had drawings for different items from the different countries represented. I won this necklace from Malta. You can search for Mdina Glass to see the beautiful things they make. The cross is the Crusaders' design and the eight points represent the Beatitudes. So pretty. Haven't won anything in a long time.

Can't believe this is the ONLY picture I took when we were able to get together with some friends of ours from SLO (Dauphins) who now live in the area. The fellowship and food was so nice. It was fun getting together, seeing the kids who have grown up so much and just catching up. 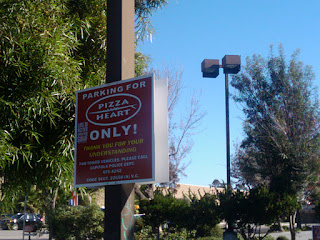 Just about home - there's our exit. What a great weekend!

We went to the Honda Center for a concert - Lord of the Rings. It was really nice except for the fact that it was the whole movie. Don't get me wrong, I love the movie. But even the lady next to me was disappointed. We both watched the movie to get psyched up for it and thought it would be just different scenes with the orchestra playing music for that scene. That's what they did with Star Wars last year, apparently. So, we sit for almost four hours. The music was beautiful, the soloists were okay (no comparison to Enya). Still a fun night with the kids (even though they weren't feeling well, but were able to get through this). It was actually a birthday night for Dan (a few weeks removed). 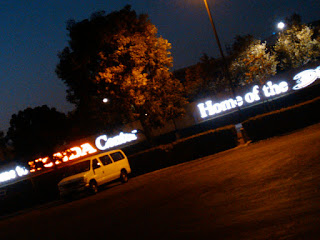 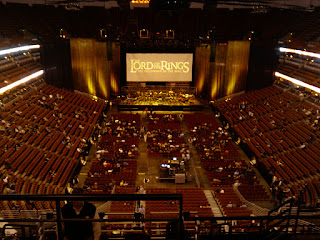 I didn't even think about taking this picture till after I passed the bushes. They were so pretty with all their colorful flowers. You can kind of see the different colors. Just around the corner from me. Might take another shot if I get a chance.

A few blocks away this corner house decorated for Halloween. Kind of reminds me of a friend who really does it up for holidays. I don't do Halloween decorating, but it's kind of fun to see other's stuff.

And we DO have Fall in Redondo Beach! :)

Okay. Now link up your photos. I have to thank Jeannett again for this fun Friday blogging. At least I get a blog a week done, for the most part. Will try to do more.

Look for a friend...

Look for a friend who will love you unconditionally and accept you as you are, as she points you toward Jesus. Look for someone who will walk with you through thick and thin, as she reminds you that Jesus cares and understands. Susan Miller, After the Boxes Are Unpacked


No one has ever seen God; but if we love one another, God lives in us and his love is made complete in us.

I love this InstaFriday blogging, but I'm not doing it as well as I would like. Well, here are a few things from this past week. Happy Friday and link up with us.
Just for the fun of it, I took a few shots through the sun roof of my fun car. I don't know why it took me so long to open it while driving, but I decided it was a great way to get my Vitamin D that, apparently, I am lacking. It's so fun and warm and sunny - I do have to wear a hat or pull my hair into a ponytail, but that's fine. I'd rather do that than have my hair flying everywhere and knotting up. It feels so good to have my roof open while driving - not as much fun on the freeway, but I hardly drive there.

Waiting for the train to pass by. I wish I would have been prepared because at the tail end of the train was a rail truck following the train. Looked so funny. Reminded me of Back to the Future III when Marty ended up on the train tracks when he came back to the future. :)

I finally picked up my Hymns sign that Joy left at my mother-in-law's house. LOVE it! Gotta hang it up now. Let's hope it doesn't take as long to do that task as it did to get it.

I tried to get a picture of an airplane going overhead. Should have opened my sunroof. Duh!!!!! I'm sitting in the cellphone parking lot for LAX waiting for Liz and Gregg to arrive from OR after visiting her sister. They had a great weekend. It was supposed to be the weekend we were all going to be up their for Danielle's wedding, but it didn't happen. Instead, they had Danielle Day and a ton of her friends came from all over just to be with her to support her on this difficult weekend. It was a success! I thank God that she has supportive friends who care about her and come to her when she needs them.

Can you see the plane? :) haha

We were in SLO visiting and when we come for a visit, we usually go to our storage unit to look for a couple of things that we decided we needed after all. Well, we were going through one of Dan's boxes and lo and behold... PEACE!!!

...and a gift he THINKS he bought for me years ago, but just never bothered to give me. haha I love this cute little jewelry box.

And the earrings aren't bad either. Wish you could see them better in my ear. :)

Well, now it's your turn to join us with your cellphone pics. Whether you have an iPhone or not (like me), you are welcome to share. Have a fun Friday.

I keep changing the name of Sunday's blog. I'll keep it to Hope Sunday.

Where we ate lunch with Dave, Marie and Edna to celebrate hers and Dan's birthdays. Such a beautiful day in Cayucos. Even though it was windy, the glassed barrier kept it from bothering us. So nice. 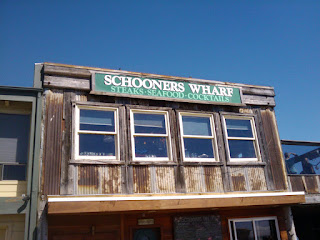 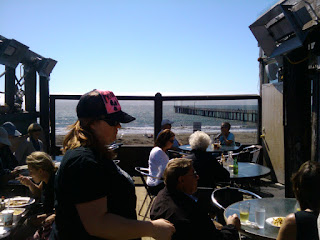 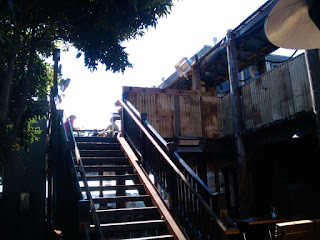 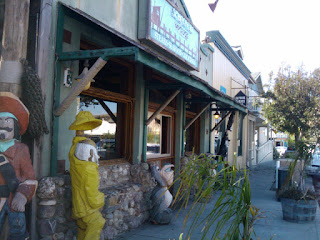 Walked on the pier. THERE it was really windy. Dave lost his hat in the water and we watched as a pelican claimed it and sat on it. So funny. And those spikes on the lamppost would keep ANYone off. 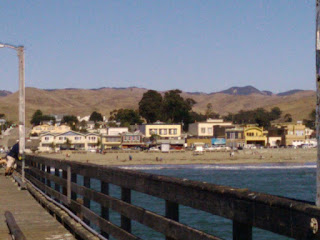 The south end of Cayucos where some friends of ours are building a beach house. I'm so, SO jealous. Notice the stairs and the sign and the VIEW. See why I'm jealous. I'm excited for them. I already told them we were going to stay with them when we come up to visit. I think they're okay with that. 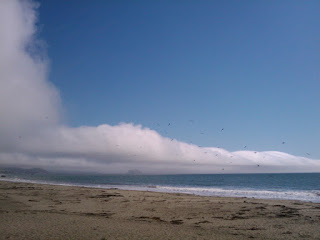 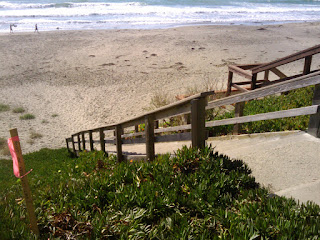 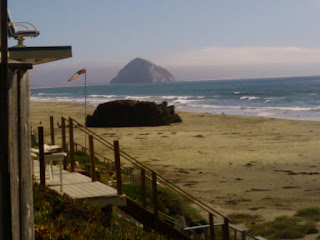 This is a plaque on the bench just at the top of the stairs where my friend's beach access begins. 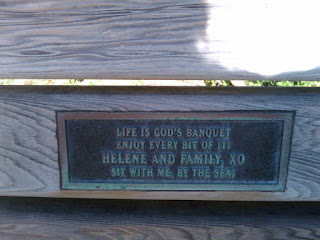 I hope you have a very fun and exciting or relaxing weekend. Join us with your cellphone pics. It's fun to see and meet new friends.