How Did You Get Your Name?

As I look through my Google Reader and see all the titles/names of blogs, I started thinking about who was behind the blog. Some of the names are obvious to me, while others made me wonder what influenced you to choose the name you did.

As for me, I think you figured it out. I was born in Guatemala and placed in an orphanage. I was

adopted by an American couple who were in the Army and "happened" to be in San Salvador and they wanted to adopt a baby. They couldn't do it in San Salvador because they wouldn't let the children out of the country at the time, so the couple went to Guatemala and found me. ADOPTION #1.

After moving to San Luis Obispo, and after my best friend moved away, I started getting some strange letters about a "new life" in Christ and being "born again". I accepted Jesus as my Savior when I was 16 and realized that I was adopted by God - I became His child and a sister to Jesus...ADOPTION #2. 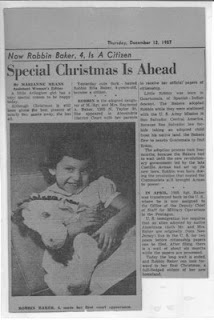 Sometimes I think I should be Thrice Adopted because I also became a citizen of the United States when I was just shy of four years old...adopted by this country. Oh well. I would have to write a whole new poem, change my email address and all my usernames if I did that, so I'm content with Twice.
So how about you? Care to share how you got your name?
Posted by Mama Mote at 8:54 AM 2 comments:

I don't have children at home anymore, but a lot of friends are becoming grandmas and I'm finding some fun places to find some fun stuff. I wish I knew how to make links better. But one place I found through The Pleated Poppy is this: Blue Corduroy: Hat Giveaway

There are some cute hats and I would love to win one, but I will look at this page more now as I look for gifts for kids, new moms, etc. And maybe someday you can buy something for me when I become a grandma (in a couple of years I'm thinking). So check it out and try to win a hat, too.
Posted by Mama Mote at 1:44 PM 3 comments:

We headed up the coast to the Piedras Blancas Lighthouse, went past it about a mile and a half and met up with the tour guides. The tour took about two hours - learned about the vegetation, the sea life and the history of the lighthouse (and saw the original lens in Cambria) and we actually saw whales heading south. We could see the spouting - wish we could have done our whale watching on Sunday, but Virg's has agreed to give vouchers to the Christian School for those who still want to do the whale watching, so we will do that when we get the chance. 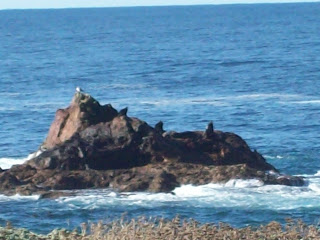 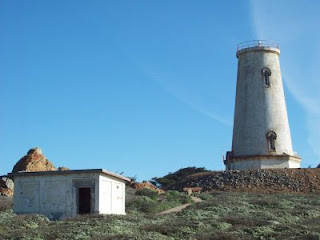 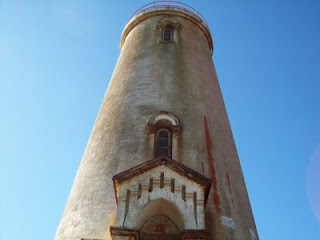 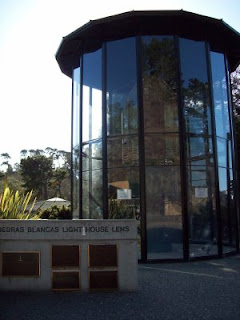 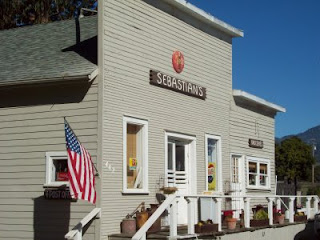 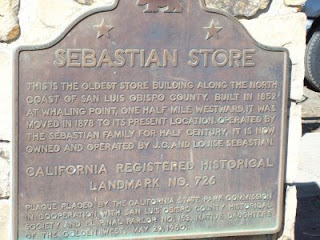 Continued to San Simeon Beach and walked on the pier. Some kids were playing soccer around a bull elephant seal who didn't seem to care. Saw one bull near the pier and another one swimming around. 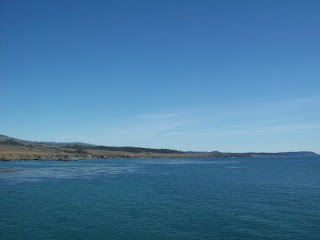 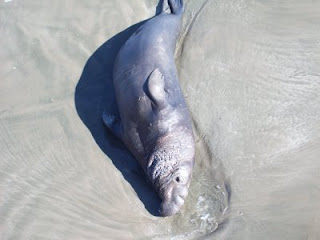 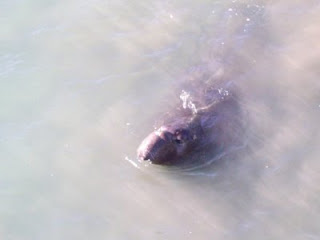 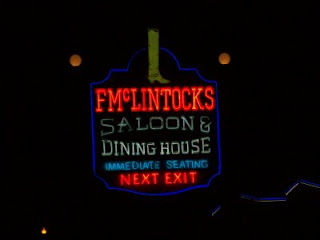 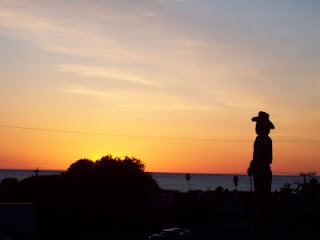 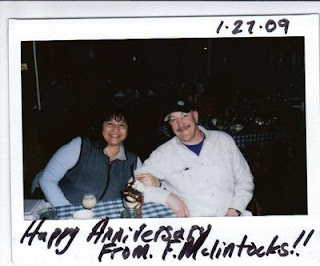 If you read all these blogs about our anniversary trip - I can't believe it! Thanks. It was fun and it was a blessing to be able to see God's creation in our area. We did our enjoying of God's nature around us before Pastor Tim even gave us the homework. But we do live in a beautiful place, and if you haven't taken it in yet, start now, especially if you have kids. They will absolutely love to explore this area. I'm sure there are places I don't even know exist. I just love this place!!!
Posted by Mama Mote at 5:40 PM 1 comment:

Oh, yes. It's Monday. We start heading to Cayucos to find our motel, and then continue on up the coast. We stopped in Harmony. 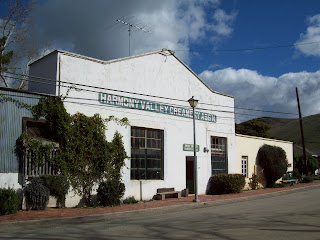 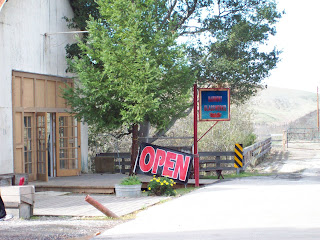 It was kind of sad to see this cute little area so quiet. The post office was closed down, but the Pottery store is still in operation from what we were told. We didn't really look around, but we did go into the Glass Store and Dan bought me an anniversary present. 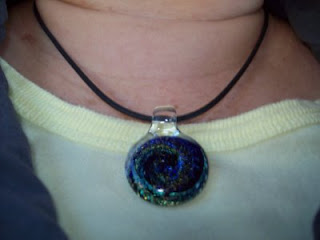 Then we headed to Cambria, ate at Main Street Grill and continued on up the coast again. We made it to the Elephant Seal lookout and just marveled at these great creatures of the sea. It is the birthing season - first pup was born on December 20th. There were a lot of moms and pups...they mate, get pregnant, have their pup, wean them after about 4 weeks and then leave them to themselves to learn how to survive. Then they mate again and the cycle continues. What a life? They were so fun to just watch and listen to as they were laying around. Every so often a bull would chase another bull - we never did see an all-out fight. And sometimes a mom would "yell" at anyone coming near her pup. It was just a fun time. 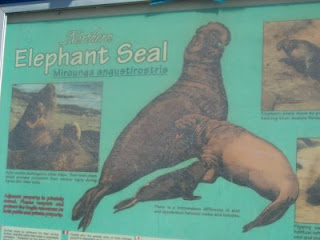 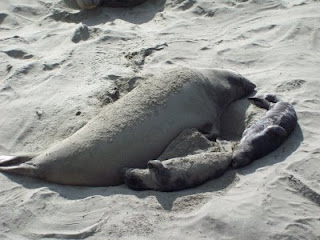 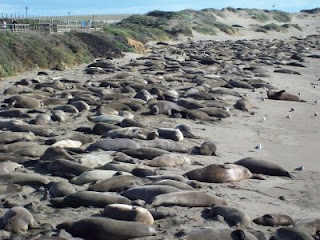 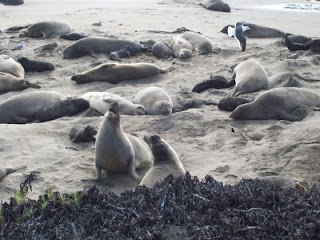 There were also these cute squirrels - FAT squirrels - that could come right up to you and actually BEG for food. They were so cute. I wasn't fast enough to get one begging. They scurried too fast. 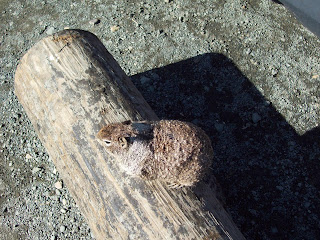 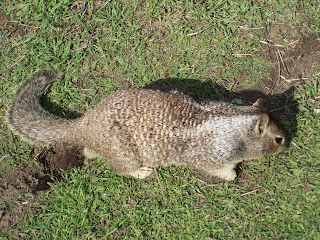 So we continued driving and we see the Piedras Blancas Lighthouse. As we drive by, we notice a sign showing tour times. We happened to be available on Tuesday at 10:00 so we decided that the next day we would get up and head up the coast again to take the tour.

As we head back to Cayucos, we stopped at Linn's to get dessert. We got to our hotel and decided we should probably eat dinner. So we walked to the Sea Shanty down the street and had our fish and chips.

Okay, I'll try to finish this up tomorrow.
Posted by Mama Mote at 7:30 PM 2 comments: